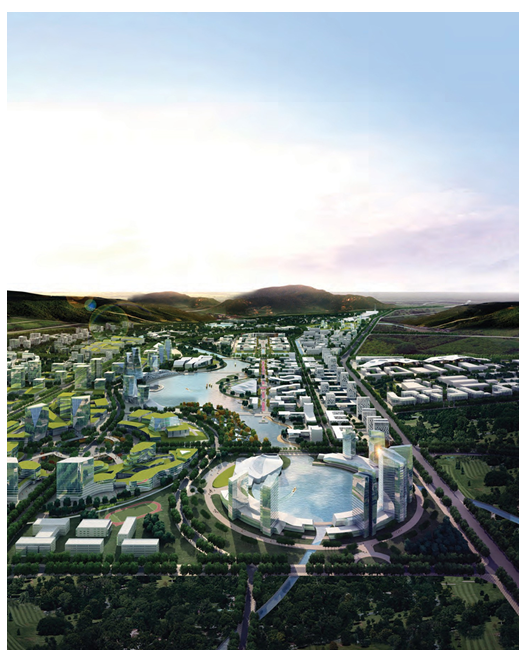 Anshan is China’s steel capital. The city was founded in  the Ming Dynasty in 1387. Its steel industry started in 1916  and saw biggest development in the first three decades  after CCP took control of China in 1948. The city suffered

economic decline in recent two decades as demand of  steel dwindled. The city haven’t been able to compete  with Dalian or Shenyang due to lack of economic diver-  sity. The government calls for a revival of economy and  announces a plan to build a new town in the south region  called Tanggangzi.

Tanggangzi is known for its natural scenery and tourism.  The phase 1 of New Town has an overall area of 55 sqkm.  Its central dynamic zone (CDZ) of about 8.9 sqkm. It will  include civic centers, government centers, commercial  CBD, tourism centers, and conference centers. After win-  ning an international design competition, SaaN was com-  missioned to provide comprehensive guidelines for urban  design and real estate development in the CDZ.

SaaN’s planning scheme establishes four criteria for  the new town: active city, open city, beautiful city, and  healthy city. A sustainable model of ecological city is used  to design the physical forms of the CDZ, which is based on  Anshan’s topography, CDZ’s functional relationship and  requirements of a humane environment.

A total of eleven (11) urban parks are creat-  ed within the CDZ along with twelve (12) city  centers of special functionalities and urban  theme.

There is a natural waterway running through the site,  from which three dams are designed to form a meander-  ing lake and river system for the CDZ. Storm and drought  prevention are systematically designed with this water-  way system. It provides a focal center and the dynamic  source of energy that link the entire CDZ together.

The skyline of CDZ is designed to correspond  with various building density, and be har-  monic with natural scape of hills in the back-  ground. The goal is to maintain a garden city  appeal. Locations of landmarks are designed  to give CDZ unique identity and distinction,  such as the Anshan Steel Tower at the entry  of CDZ, the re-adapted Art-District from ex-  isting locomotive engine plant, Civic Circle,  the marshland mile, and the Water Plaza,  etc. Architectural guidelines are specified  for each special use district. Zoning require-  ments are compiled for each land-use parcel  in the entire CDZ.