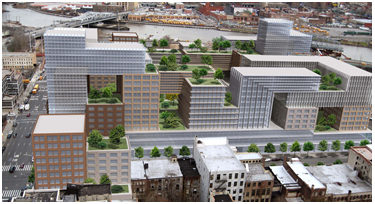 Interactive Development Associates aided in creating the proposal for “New Harlem,” a 1.7 million square foot music-themed development to occupy 2 city blocks along East 125th Street. The development will contain retail, office, residential, cultural, hospitality and public spaces. Combined, the retail outlets will form a new shopping hub in the city, serving everybody from musicians to aficionados to everyday fans. Commercial space is for companies in the entertainment industry, with studios specially designed to allow visitors to take tours of the process behind professional recordings. Cultural spaces, including performance spaces, will be operated by a non-profit umbrella organization representing over 400 Harlem-based cultural groups. An international music-themed Hotel, a Harlem Tourist Center, and a Walk of Fame featuring quotes and bios of famous Harlem residents, will all combine to establish a thematic heart for the future development of this historic neighborhood. Numerous local and international organizations have signed on during the development of the offering proposal, which will be awarded in 2007.